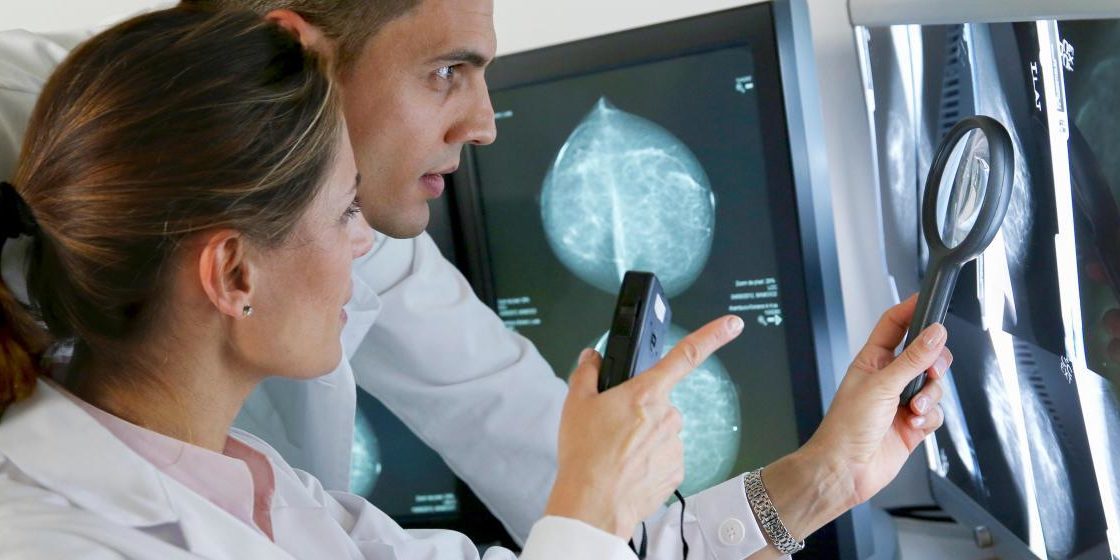 What if there was a way to drastically improve the likelihood that breast cancer could be detected early?

Mammograms are a good start, but even regular mammograms are far from a guarantee. Their false negative rate is alarmingly high; doctors only detect cancer 80 percent of the time, according to the American Cancer Society. That means that, statistically, for every five women screened that have breast cancer, one will go undiagnosed.

Now, experts are exploring a tool that may help, though it may seem a bit unusual to those who know its history: blockchain technology.

Blockchain is best known for its use in verifying transactions in Bitcoin, a popular cryptocurrency. However, the new technology’s novel approach to security and anonymity is generating quiet excitement and innovation in the health-care industry as well. That’s because a secure and anonymous approach to sharing medical information is a researcher’s dream come true.

Here’s how it works: A blockchain is a “database on steroids,” says Christian Ferri, president and CEO of Blockstar. “Think of it as a digital ledger where data is recorded not by one centralized entity, but through a consensus mechanism of all the computers that are part of that blockchain. Because of the decentralized nature of this technology, blockchain allows the data recorded to be immutable, visible, and hard to hack.”

That’s because assets on a blockchain cannot be accessed without encryption keys, explains Global Blockchain Technologies Corporation President Shidan Gouran. “Any information that resides on a blockchain is encrypted, and as such cannot be used by someone with ill intentions,” Gouran explains.

It’s easy enough to see how, in the case of breast cancer research, increased access to medical information could move the needle in a number of ways. For one thing, it could encourage more people to share their genome data with the scientific community without the risk of the information getting abused. And the more data researchers have, the more likely they are to achieve breakthroughs.

“Blockchain technology brings with it great security enhancements, which is very important when you’re talking about an individual’s genome data,” explains Alexander Lowry, a finance professor at Gordon College in Massachusetts. “If you combine blockchain with cloud computing, genome sequencing, artificial intelligence, and big data analytics to medicine, you can accelerate breakthroughs.”

Genome data has already led to a major achievement in breast cancer treatment, when scientists discovered that there were actually different types of breast cancer. That led researchers to approach their search for a cure differently. That search paid off when just last year, after successful clinical trials, the FDA approved a new treatment for a specific type of the disease known as HER2-positive breast cancer. And this was achieved in the current siloed world of medical research.

Now imagine a blockchain-backed system that has the capability to create a global medical ledger. Genome data can be stored on that ledger, allowing the information to be widely accessed while at the same time being incredibly difficult to hack. You could also theoretically include a vast trove of mammogram readings from those with cancer in this system. That kind of data could help push forward efforts to use artificial intelligence for breast cancer screenings. Since AI gets smarter and more accurate by “learning” from as many data points as possible, more sample readings are critical to improving its capabilities.

Organizations like BreastWeCan.org, for example, are asking women to donate their mammograms or other breast imaging scans for research purposes, using blockchain technology to secure millions of scans.

That could be game-changing. With improved accuracy, artificial intelligence could assist radiologists reviewing each mammogram, flagging potentially cancerous results that may have otherwise been missed for human review. And remember, discovering breast cancer in its earliest stages literally saves lives.

Using blockchain technology for such purposes may seem like a no-brainer — but the logistics make the move more complicated. The concept of using blockchain for non-financial transactions is a difficult one, largely because it takes a decentralized network of thousands people running powerful software to create and maintain the blockchain. Running that software comes at a cost. And for a medical blockchain, it is unclear who would take on the responsibility and expense of running the software that cryptographically seals the information into a block. (One possible solution: Perhaps medical researchers could run the software as a type of “payment” for their access to the anonymous, population-level data that could push their research forward.)

While the many possibilities that blockchain advances are certainly exciting, experts such as venture capitalist Scott Amyx caution against overselling what blockchain can do. “Blockchain directly will not detect or prevent cancer,” he stresses. The technology is fundamentally simply “a form of cryptography or security that addresses mutual authentication in a trustless, decentralized network.”

Even as he warns against getting too excited, though, he goes on to list even more possibilities for using blockchain in the fight against breast cancer, or cancer in general. “Through the use of wearables, medical wearables, diet and fitness apps, and clinically administered data, [blockchain] could authenticate and maintain a ledger of your holistic lifestyle to determine your chances of developing breast cancer,” Amyx says.

For the one in eight American women who will be diagnosed with breast cancer in their lifetime, and for the 40,000 lives that breast cancer will take this year, even an idea that still has kinks to work out is enough to create hope.

Blockchain is not a cure, but it has the potential to be an important technological tool in the fight against breast cancer. In the end, it’s up to human innovators to put that tool to good use.

The Latest from the SEC regarding ICOs
December 29, 2017